The mountainous regions of north and northeast India, the arid terrains of Rajasthan and Gujarat in western India, and the Deccan Plateau are home to one of the largest populations of sheep in the world. India's vast genetic resource of sheep, yak and camels especially have been conserved and bred by the nomadic pastoral communities of these regions. Even two and a half decades ago, pastoralists extensively used wool for domestic purposes. However, with increased demand for sheep meat and with governments promoting meaty over dual purpose sheep breeds, pastoralists have begun to dilute their native stock by mating ewes with rams of meat producing breeds. Across these regions, indigenous sheep numbers have declined in proportion to the overall flock, and with it there has been a sharp fall in the production of local wool. This is in spite of the recognition that cross-bred animals are more vulnerable to disease and less resilient than the hardy local breeds.
Visitors engage with felt exhibits at a Desi Oon exhibition, Bikaner House, New Delhi, Jan ‘20 © Khamir 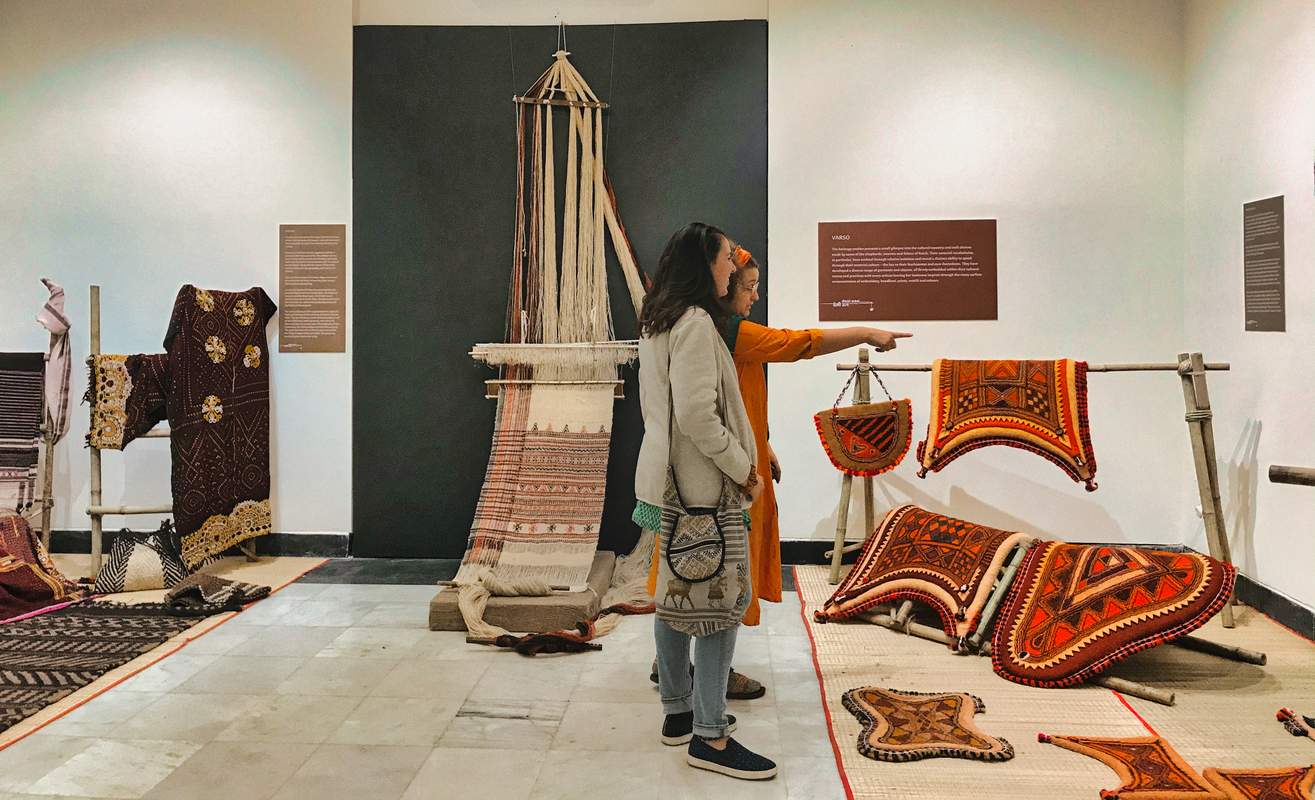 The elimination of tariff barriers on wool in the mid-nineties led to the Indian hosiery sector moving to the softer, longer staple wool from New Zealand, Australia and other parts of the world. But sheep have to be sheared twice, sometimes thrice a year, and the bulk of this ends up on the roadside with no takers. Of the coarse wool that does manage to reach the markets - and all of it produced by pastoral communities - nearly 95% is used as carpet grade wool or as some form of bulk filling in blankets with only 5% used in apparels. Ironically, while India boasts of the third largest population of sheep in the world, it is the only natural fibre in which we are deficient!
Pastoralists have always retained a pride and preference for their native sheep breed as long as it is economically feasible, which needs the presence of a thriving wool economy. But where do they begin? Investment in research and technology development to enhance the quality of the coarse wool yarn has been meagre over the past many decades. Persistent and renewed efforts to refine this versatile khadi textile are waiting to happen, without which the narrative cannot change. We believe that the combined efforts of State-run wool research institutions, grass roots organizations, pastoralist associations, and professionals can rewrite the script for the future.

Organisations like Mitan Handicrafts in North Karnataka have already done pioneering work with the Kurubas and Gollar pastoralists in partnership with Shramik Abhivrudi Sangh in the conservation of the Deccani breed and its fibre. More recently, Khamir in Kachchh, Gujarat is breathing new life into the entire value chain of indigenous wool with the Rabaris in the region. Growing initiatives like Looms of Ladakh are also generating new hope for the Changpa herders and spinners.

CfP has been working to: a) Develop and disseminate a nuanced understanding of sheep pastoralism as well as the wool economy; and b) Work with craft, natural building and educational organisations to explore ways to develop livelihoods based on wool.
A Kuruba weaver crafting a Black Gongadi in Karnataka © Shouryamoy Das 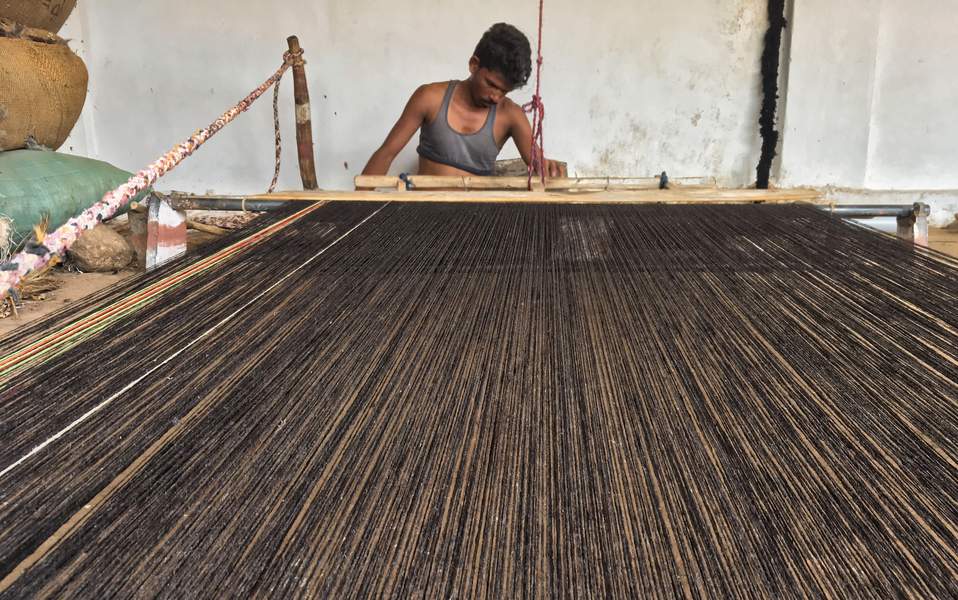 a) Study of
wool economy

In 2018, CfP began a rapid assessment of the status of sheep herders and the wool economy across various bio-regions. The first phase of this assessment covered Rajasthan, Gujarat, Telangana and Uttarakhand and was completed in early 2019. The second phase covered Himachal Pradesh, Maharashtra, Karnataka and other areas of the Deccan. Field trips have been completed and a national level report as well as most state reports will be published this year (2021). CfP held an online ‘Desi Oon’ exhibition at which nine noted organizations presented their indigenous wool collections from December ‘20 to February ‘21.
Broadly, the study confirmed a decline in herder incomes from wool, along with a loss that the herders incur due to increasing costs of shearing. While the wool economy has grown significantly, the growth has been due to imported wools while indigenous varieties have been largely phased out of the Indian market. Macro-level factors like decreasing pastures and low-quality feed have resulted in poor quality sheep fibre, and consequently, low demand for indigenous wool. Interestingly, manufacturers of the carpet and felting industries of Rajasthan asserted that Indian wool, particularly that of the Magra and Chokhla breeds, is well suited to the production of carpets and home textiles as well as in applications for insulation. Thus, while minimal, there still exists an indigenous wool economy in some parts of the country.
A yak wool ribo tent on the cold desert of Ladakh © Monisha Ahmed 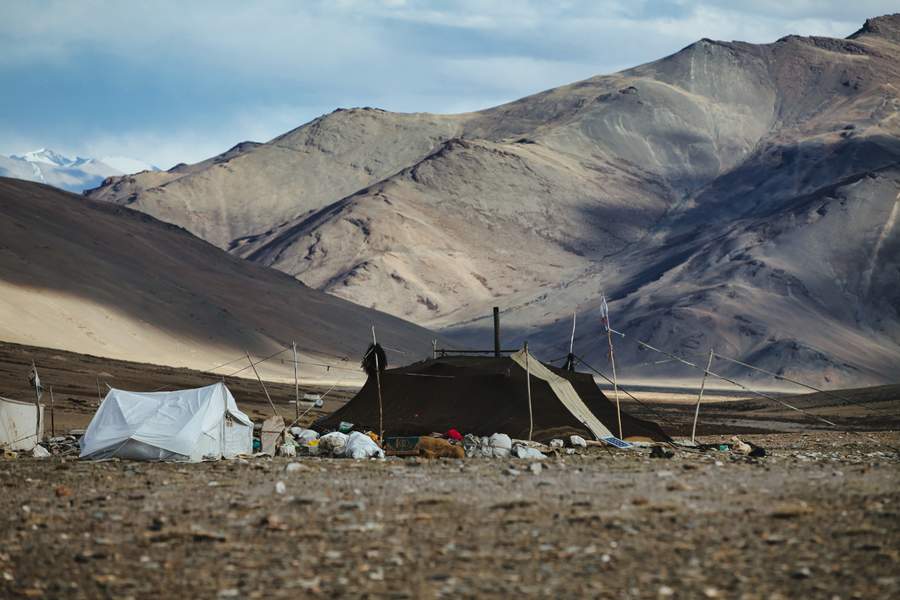 b) Development of wool based livelihoods through partnerships

CfP is working with partners to create a platform where technological and design innovations to improve the quality of the fibre are explored and shared, even as livelihood options and market interventions are co-created for the spinners and a large weavers community with ties to sheep herders across the country.

CfP is currently supporting Khamir and Rangsutra to develop integrated value chains for sheep wool through collection, spinning, fibre and yarn treatment, and product and market development. Avani in Uttarakhand is seeking to develop value addition through the use of natural dyes in combination with different types of indigenous wools in a partnership with CfP. Dakhni Diaries in Deccan is working with the Deccani wool to produce a range of woven and felted products and textiles. CfP is exploring the possibility of developing partnerships with Jaipur Rugs towards enhancing the use of indigenous sheep wool.

For the wool economy to survive, however, there is a need to identify industrial uses of indigenous wool. Towards this, CfP is exploring the potential of using wool as building insulation as well as as a biofertilizer.
A Pattu weaver at work in Rajasthan © Dr. Arun Mani Dixit 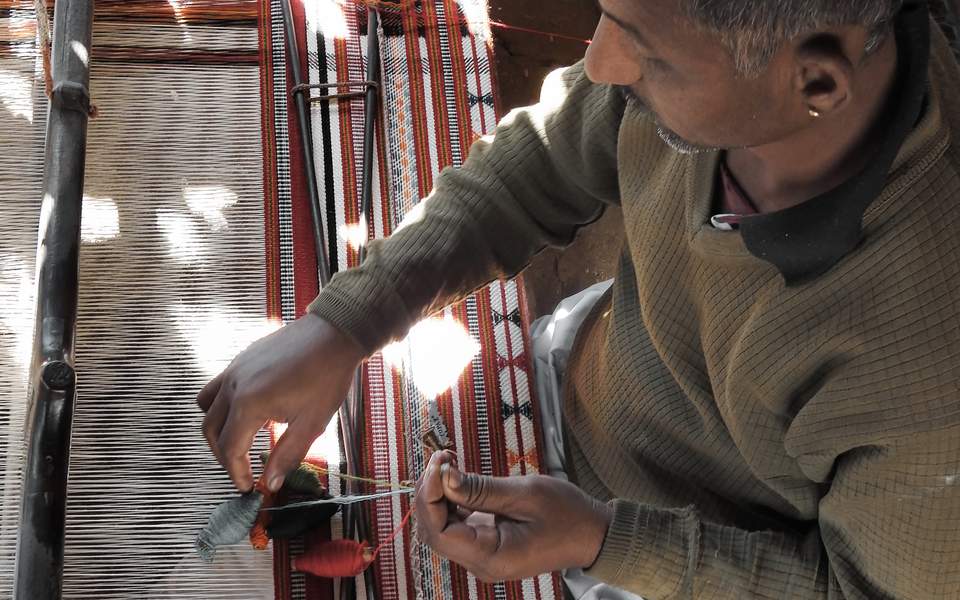 CfP is partnering with Hunnarshala, an architectural firm, to test the efficacy of wool as insulation in buildings under construction in both Kachchh (extreme heat) and Ladakh (extreme cold). It is also reaching out to partners in MIT and IIT Delhi’s Rural Action Technology Group (RuTag) for collaborative research aimed at better understanding wool properties as a fire-retardant as well as its long term durability. With the aim of mainstreaming such use of sheep wool, CfP is also reaching out to the building industry to share the results of their work.

CfP has partnered with Kachchh University and with the Sardar Patel Renewable Energy Research Institute to better understand the potential of sheep wool as a biofertilizer. Ongoing research aims to determine (i) rates of decomposition of wool under varying conditions of heat and moisture stress; (ii) nutrient composition of such wool, and (iii) the efficacy of plant absorption of these nutrients under a range of field trials.

Additionally CfP has been working towards the need to advocate for investment in the wool economy, develop the Desi Oon brand, and promote wool artisanship. A series of events and webinars are being planned to pursue these objectives.